Eccentricities Of A Nightingale at ANW 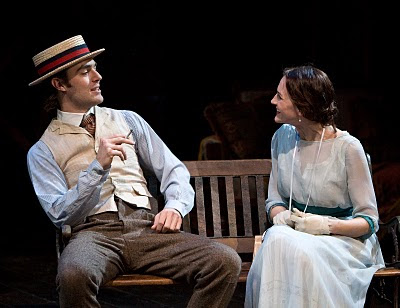 
The Eccentricities of a Nightingale

The centennial anniversary of Tennessee Williams’ birth is cause for celebration. Theatres across the country are reviving his pithy gothic take on Southern Society. Everyone who has seen The Glass Menagerie has met the dominating southern matriarch. Big Daddy in Cat on a Hot Tin Roof may be the archetypical patriarch, Stanley Kowalski, the domineering Alpha Male. The delicate flowers of Laura and Stella. These are elegant archetypes sometimes reflecting one another from play to play.

Set around the time of World War I in a small town in the South we meet Alma Winemiller (Deborah Puette), upon whom the story turns: the Nightingale who sings with great passion and laughs too loudly and too often. Reverend Winemiller (Mitchell Edmonds) curses the fact that he’s sent her to the music conservatory. The Reverend’s treatment of women is immediately evident as he orders around his mentally failing wife played with demented distinction by Jill Hill in a delicate turn,

Alma mistakes John’s attention for a romantic interest and invites him to a meeting of a group of artsy cronies in an attempt to draw him closer and show him off to her friends.
The uncomfortable meeting of geeks and freaks played by Dave Kirkpatrick, Jacque Lynn Colton, Darby Bricker and David LM McIntyre attempts to codify their own importance by adopting a manifesto. The ennui is thick and echoes Alma’s lonely reaching out in her over zealous search for love.

Performances are top notch with Puette slightly over the top in the first act, moving comfortably into the character as Alma realizes the truth about her relationship with John. From prim and proper and trying too hard to please, to a woman of experience is a nice arc for the actress.

Rodriguez keeps the action moving smoothly on Joel Daavid’s Joseph Cornell inspired set which beautifully frames the story. Leah Piehl’s period costumes are luscious with a pink plume for Alma that may repeat through the entire ANW season from play to play. A nice touch.

THE ECCENTRICITIES OF A NIGHTINGALE
by Tennessee Williams
A Noise Within
234 Brand Blvd.
Glendale, CA
Opened Saturday, March 19 plays in repertory
through Saturday, May 28, 2011.
Tickets and information
818-240-0910 x1
www.ANoiseWithin.org
$46.00 Top