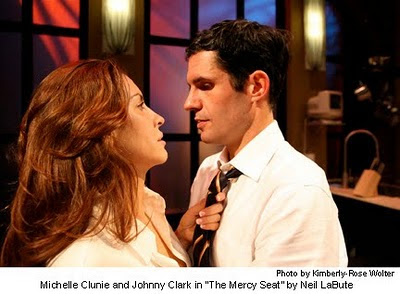 Several definitions of “mercy seat” come up in a Google search. In Neil LaBute’s play now on stage at [Inside] The Ford, I’m having difficulty relating the title to the play itself. One definition has to do with a ledge where the faithful may rest during a required long stand in church. Another relates to the covering on the Ark of the Covenant where God met man in the Holy of Holies. I have not vetted this quote, but it may give us a clue to LaBute’s angle on what is going on with the two lovers who make up the cast of the play.

“…and I will commune with thee from above the Mercy Seat, from between the two cherubims which are upon the ark of the testimony, of all things..." Exodus 25:17-22

Does this definition have relevance to Ben (VS. founder Johnny Clark) and Abby (Michelle Clunie)? Was the 9/11 Attack a message from Above that drove them to face each other (two cherubim?) in a moment of Truth? Abby and Ben (he is unhappily married with children) have been lovers for more than three years as they rendezvous the day after the September 11th attacks on the World Trade Center. Abby Prescott’s apartment, a stylish loft in lower Manhattan, is lushly decorated in Danny Cistone’s expensively appointed set. In fact, everything about the VS. Theatre Company’s West Coast Premiere of The Mercy Seat shouts First Cabin. Pre-show the audience is surrounded by projected images of the New York City skyline. A sound montage includes sirens and news reports of the aftermath of that terrible day. At rise, a small television set upstage recounts the ongoing problems in the city. A lot is going on all at the same time.

Ben sits with the dust of the tragedy on his pants legs, seemingly in shock. Abby enters in a whirlwind. She is full of anger. The two are colleagues in an office in the World Trade Center. She is Ben’s boss. In the relationship, defined and redefined in the almost two hours of dialogue, the struggle for some common definition of what the relationship is, has been and may be emerges. Power shifts back and forth, but mostly lands with Abby as the two of them play tug of war with emotions and the ultimate decision for Ben to “make the call.” They avoided being at Ground Zero the day before. But no one knows that they were not there.

LaBute is not Edward Albee. Ben and Abby are nowhere near the peaks and valleys we find with George and Martha in “Virginia Woolf.” Clark and Clunie create believable characters and steer them through the morass of emotions and ethics, already compromised for three years with their on-going affair, but it’s more of an acting exercise than a conceit that makes us much care about either of the characters. As an exercise in stage discipline, the two deserve applause. At Sunday’s matinee, Clunie, at the curtain call, was obviously exhausted. It was, indeed, hard work!

So.. An urban morality play? What is the ‘right thing’ to do? Who’s in charge? Two cherubim face one another at the Moment of Truth? An acting exercise well played? Mostly, the latter.

Director Ron Klier keeps the pace up and working, but has little opportunity for action with the exception of a moment of passion which inexplicably turns the blue sky crimson red; then fades as the dénouement arrives. Even so, the production values are excellent.

Applause to The Ford Theatre Foundation and the L.A. County Arts Commission with support from the National Endowment of the Arts for making [Inside] the Ford available for challenging new theatre. The venue lends itself to one set productions and I, for one, commend VS. Theatre Company as well as The Rogue Company's production of HYPERBOLE: origins and Theatre Neo's FREE produced there this season.

Email ThisBlogThis!Share to TwitterShare to FacebookShare to Pinterest
Labels: INSIDE THE FORD, LA Theater, The Mercy Seat, Vs. theatre company