The Frybread Queen / Native Voices at The Autry 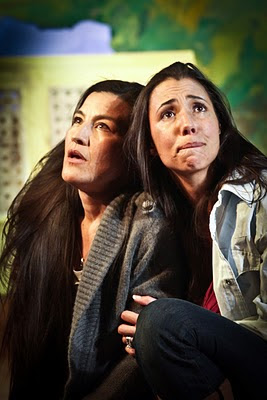 Native Voices has for many years held forth at the Wells Fargo Theater at The Autry Western Heritage Museum in Griffith Park. “Theater” is a slight misnomer, as the space is basically an auditorium where it’s difficult to mount a professional looking production. This is not to say that the company doesn’t do the best it can with what it has to play with. Playwright Carolyn Dunn’s The Frybread Queen has been in development for several years and has, at last found its way to The Autry. It is directed in a very straightforward way by Robert Caisley.

A mixture of ghost story and family competition unfolds as three generations of one family come together to bury Paul, the son of Navajo matriarch Jessie Burns (Jane Lind), Frybread Queen the first. We meet Jessie, who breaks the fourth wall to announce her traditional recipe for Navajo frybread. (Her finding a loaded pistol under the sink has nothing to do with frybread.)

As the story unfolds, the rivalry turns on who deserted whom and why and what drove Paul to suicide… or was it? Lind’s heavy declamatory style is probably a creative choice worked out with her director. This style is not echoed so much by the other women. The whole presentation is certainly heavy on the dramatic with ghostly possession and strong physical performances presented throughout. The supposed rivalry of whose frybread is best is only an excuse for a deeper story. Carlisle, now living with Jessie's younger son in California, uses self- rising flour. Jessie calls it “Hollywood frybread." The audience enjoyed this reference a lot. For me, Jessie’s recipe was the one my Aunt Carolyn used and I’d eschew the self-rising flour, too. Annalee’s recipe using buttermilk sounds like one I’d like to try. I’d have been very happy to see these recipes come to fruition on stage with the aroma of bacon grease and frying dough wafting over the audience. However, it is not about the frybread at all. The frybread is simply a matrix for the issues plaguing these four women on many different levels.

NATIVE VOICES at The Autry speaks to and for the Native American Community. The Frybread Queen’s actors are strong, though the production values are marginal. At the intermission it would have been great to have samples of Jessie’s, Carlisle’s and Annalee’s frybreads for sale.