The Chairs, a fond adieu 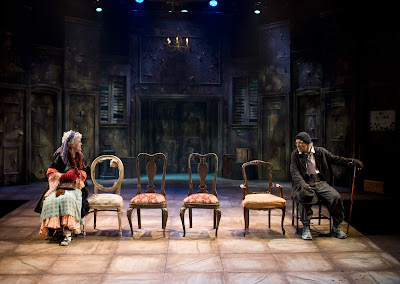 “To everything there is a season, a time for every purpose under Heaven. A time to be born and a time to die…” So says the Book of Ecclesiastes or The Byrds, depending on your personal experience. The correlation of how things change is reflected in the anticipation of the brand new Pasadena space currently under construction for A Noise Within: ‘a time to be born’ and the death of a theatre tradition in Glendale. The third production in this final season in Glendale for A Noise Within features long time favorites, ANW founder Geoff Elliott as Old Man and Deborah Strang as Old Woman directed by Julia Rodriguez-Elliott. Written by Eugene Ionesco, and first produced in 1952 the play challenges the audience to discover the meaning of the story rather than simply absorbing it as we often do when attending the theatre.

Stephen W. Gifford’s rag tag peeling post-apocalyptic set borders off stage water. The Old Man hangs out the window because he likes to look at the water. A hand written sign barely visible on a chalkboard requires, “No Diving!” Indeed within the first few minutes of the play, Old Man practically violates the rule by half tumbling out the window. He is, of course, General Factotum, my darling and could have been the best of practically any important post had he only really wanted to. If he had taken some initiative, as Old Woman points out continually to her ‘darling’ he could have been anything.

Whether or not Old Man and Old Woman are indeed really a couple married for over seventy years or if they are actors simply playing at the end of the world may be an interpretation to be considered. They know each other so well (as do Elliott and Strang) and mutually subscribe to the absurd notion that they may be the last two people on earth. Or are they? They anticipate a multitude of visitors from every social station and are especially excited about the arrival of THE EMPORER for whom they prepare a virtual throne. Invisible characters arrive, brought to life by the Old Couple’s mutual acknowledgement as they prepare for The Orator (Andy Stokan) who has been employed to impart to not only the assembled throng, but the audience, as well, what may be the Meaning of Life! These are actually the Old Man’s insights, but he’s not so good at speaking, as he eloquently admits time and again.

Interesting, though inexplicable, Ken Booth’s lighting changes from time to time, climaxing with a flurry of pinwheels spinning madly, sound and fury, as more and more and more chairs and more visitors arrive until the stage is completely filled with chairs and invisible guests. At last, The Orator arrives in a grand manner. Welcomed by the Old Couple, he takes stage with authority.

The issue of who Old Man and Old Woman really are is never completely clear, probably Ionesco’s intention. We love their banter as they lovingly function smoothly and flawlessly as one. Elliott and Strang have worked together for almost twenty years. The simpatico is obvious. In an interview elsewhere, Elliott mentioned that being relieved of his often role as director of a show, simply acting in the hands of his capable wife, Julia, was a pleasure. Indeed, his focus and choices, perfectly compliment Strang’s, whose comedic versatility shines. Rodriguez-Elliott’s direction is crisp. With well seasoned actors in hand, the show simply works. What a pleasure. What fun the actors are having. And this, my darling is infectious to the audience.

As ANW departs Glendale to open this coming fall in Pasadena, it should be mentioned that the non-profit company is still slightly short of it’s $12Million fund raising goal. Contributions for this final push will be matched dollar for dollar by an Angel in Pasadena. Contact ANW for details and contribute as you may. This is regional theatre at its finest.