THE SON ALSO RISES AT EST-LA 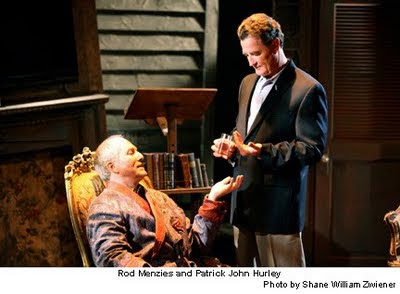 For those old enough to remember Eric Burden and the Animals, it’s impossible not to hear the heavy bass arpeggio that leads into Burden’s singing, “There is a house in New Orleans they call the Rising Sun. It’s been the ruin of many a poor boy and me, Oh God, I’m one.” Tom Jacobson’s House of the Rising Son echoes this theme and in his unique polemic regarding the politics of the necessity of parasites in the ecosystem, we meet four actors playing eight characters who advance the theory that even the human race is parasitic. Unfortunately, unlike parasites such as tape worms and mites who conduct their business subtly, never taking more than the host can safely supply, Homo Sapiens may suck the planet dry unless we change our ways. The play points out, however, that Nature has a way of fixing Herself and though we human beings may think of ourselves as being above ‘nature’, we are most likely simply stepping stones to the next evolutionary cycle of the planet.

At rise we meet handsome Dr. Trent Varro, (Paul Witten) entomologist, ecologist and heir to a dynasty: the House of Varros, whose lineage may go back to ancient Greece! As he lectures at the Los Angeles Natural History Museum regarding garden variety parasites, he discovers that he is being blatantly cruised by Felix Martin (Steve Coombs), fifteen years his junior, who is a fund raiser for the museum. Dr. Varro is immediately attracted to Felix who has a great interest in ghosts and past lives. In a steamy pas de deux they find themselves that night in Felix’s realm, searching for remnants of the past in local cemeteries.

Concurrently, just beyond the Katrina disaster zone in New Orleans, we meet Garrett Varro (earthy John Patrick Hurley) and the translucent patriarch Bowen Varro (Rod Menzies) who appear to be the father and grandfather of Trent. Subtly designed kittywhompus and multipurpose set by Richard Hoover reflects the Ninth Ward, which may be a metaphor for the whole story. Jacobson’s writing brings all of these characters eventually to light, which is, at once, enlightening and, at first, confusing. Bowen is ill and as head of the Varro Clan has specific feelings about Trent and his life as a gay man. When Trent calls to announce that he is bringing Felix home to meet the family, epithets fly left and right, even when the couple arrives.

Jacobson, as he has done in Chinese Massacre [Annotated] opening concurrently next door at the AVT, has done his research and done it well. We learn more about parasites and parasitic behavior directly through Trent’s lectures, than we may have ever learned. Interestingly, the metaphor carries directly through the plot and into the lives of not only the four main characters, but their seconds as well.

Witten appears briefly as Maureen (possibly a woman?), whose necessity to the plot was vague. A knock later comes to the Varro’s door to introduce Hurley once again as the blustery Lendell, a New Orleans tour guide to the haunted places of the Crescent City. Is he another parasite, taking advantage of gullible tourists? In a dangerous turn, Coombs returns as a stealthy hustler, Rod, upon whom the plot thickens deeply. Finally, we meet Menzies again as Robert, an aging fairy, who, in his cups does his best to rally the gay constituents of New Orleans.

Michael Michetti directs his cast fluidly on Hoover’s earthy three quarter thrust stage. The cloying atmosphere of oriental rugs and rococo furniture lend a feeling of stereotypically tres gay décor. Some sight lines are difficult simply because in a set like this some action will, by its very nature, will be blocked.

The discomfort that the hegemonic heterosexual community may experience in seeing this play comes directly from limbic reactions that those of us stuck in our early impressionable experiences must overcome. In her program notes, Artistic Director, Gates McFadden, says, “We might find out the thing we fear is simply different and not harmful. Evolution takes time. This play might help us to nudge forward a bit.” Certainly, Tom Jacobson has the chops to help move things along.

THE HOUSE OF THE RISING SON
By Tom Jacobson
The Ensemble Studio Theatre – LA
At The Atwater Village Theatre
3269 Casitas Avenue
Atwater Village, CA 90039
April 23 through May 29, 2011
Thursdays through Saturdays at 8PM
Sundays at 2PM
$25.00 Top
Thursday April 28 and Thursday May 5, 2011 Pay What You Can
Tickets and information
323 644 1929
www.ensemblestudiotheatrela.org