PRISONERS TAKEN AT THE EL PORTAL 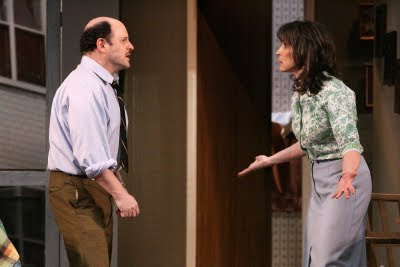 Jason Alexander and Gina Hecht
The old El Portal in NoHo is alive and well. For the next two weeks it will be available for a trip down memory lane with Neil Simon’s PRISONER OF SECOND AVENUE. Gina Hecht and Jason Alexander as Edna and Mel Edison capture Simon’s serio-comic take on life in 1971 New York. It’s Neil Simon! The jokes come apace and the message, though subtle, remains. How does one survive when “the whole world is going out of business?”

Suffice it to say that a professional company in a professional set in a gorgeous theater adds up to two hours of fun. Forty years later, the issues of today are reflected in the issues of 1971 when Mel, almost 47, rants and raves about living on the fourteenth floor with noisy neighbors up, down and sideways. To add to the romp, as poor Mel loses his job and teeters on the brink of completely losing his mind, Alexander finds the nuances of comedy that would make Mr. Simon smile. Director Glenn Casale guides his cast fluidly, but it’s the text that makes the show.

In Act II the arrival of Mel’s sisters, Pearl, Jessie and Pauline, respectively: Annie Korzen, Carole Ita White and Deedee Rescher confronting and confronted by Mel’s brother Harry, the excellent Ron Orbach (who stops the show briefly to the delight of the audience) just want to help… but not too much. The only downside for me was the choice by one of the sisters, not Jessie, maybe Pauline? to smoke. It always looks contrived and this odd choice is no different. However the chorus of the three sisters, each with a separate agenda is hilarious.

Alexander will always be known for his work as You Know Who on the You Know What Show and is doing a fine job of getting beyond his impression of Larry David. Mel Edison simply wants a normal life and emotionally plummets like a stone when he’s summarily dismissed after years on the job. Alexander’s timing melds with Hecht’s (who is mercurial and gorgeous) as they fit together like... like things that fit together well! The play is a finely tuned instrument and even with all the revivals and the film made in 1975, it still holds up. It’s a professional staging. Professional actors make full use of Stephen Gifford’s New York apartment set with Jared A. Sayeg’s lights. It’s a must see for Neil Simon fans and for those who have not seen one of his plays, it’s a great way to start!