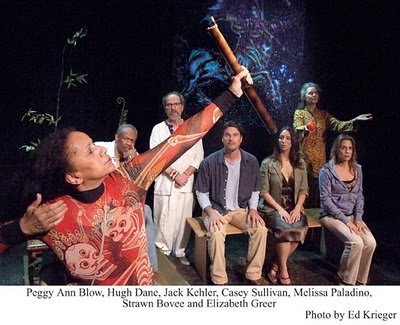 Murray Mednick’s continuation of his ‘Gary Plays’ holds forth at The Electric Lodge. Featuring the excellent Hugh Dane as Daddy O, this may be a Morality Play meant to bring the audience to personal insights and/or revelations. Just guessing. Daddy O has explored the otherworld via an ancient South American tea: Ayahuasca. (Google that!) Dane’s well crafted characterization is at once casual and intense which leads us to appreciate his vast experience. Daddy O is the epitome of ‘cool.’ There’s more going on here than meets the eye.

Daddy O is haunted by Antonio (protean Peggy A. Blow), the master of another world. Still and all, somehow, Daddy O seems to be able to control the inevitable. About this time the allegories and drama become somewhat hallucinatory and at once become fascinating and confusing by turns.

Is it Gary’s (Casey Sullivan) depression after a break up with ex-wife, Marcia (Melissa Paladino), that makes Daddy O want to expand Gary’s outlook? Certainly, Gary is depressed. Meanwhile, Gary’s first Ex, Gloria (Elizabeth Greer) mother of their murdered son, is in Chile reporting from her exotic location, which is present and distant at the same time thanks to the ayahuasca, the hallucinogenic that Gary has been administered by Daddy O. Enigmatic Dr. Jones (Jack Kehler) is ever on hand, reminding us that he is just a helper.

Earth Mother Strawn Bovee as Mama Bean, is peripheral and central at the same time. The deceased wife of Daddy O and mother of Gary she is present and absent. Each of the important people in Gary’s life serve in singular and multiple roles. The most impressive aspect of this show is that the actors are all well seasoned and under playwright Mednick’s direction, are perfectly focused. To a person every actor is fully engaged with the words and their role. The presentational style works well. What it all means is up for grabs. Puzzling out the argument is an individual quest as the curtain falls.

Ritual emerges as Antonio rolls in with magic and an ice cream truck. The spirits of the dead and the living commingle and though the essential argument of the play remains difficult to discern, the expert work of the actors and fine technical additions of Mark I. Rosenthal and Dan Reed combine with Mednick’s trippy script to make the evening pithy in the same way a vision quest might send us out of a long night’s vigil in the desert knowing that we’ve been privy to something, perhaps something important… even if we can’t figure out exactly what that is. Maybe it’s not a morality play after all? Rather it’s a mystery play following in the style of early mystery plays that were also produced in cycles?