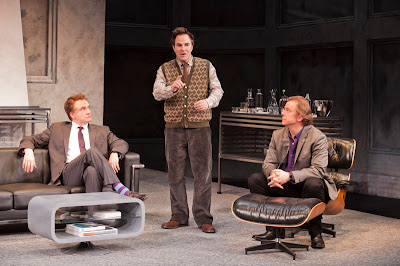 Just off the tennis court, a woman flits to and from the Box Office

A woman in a Phyllis Diller Op Art Chemise

Men happy to see one another, very

Up the stairs a suspicious woman eyes my observations

The woman with the chest tattoo has a drink, worried, perhaps, by

It’s Opening Night at The Pasadena Playhouse. El Molino's all abuzz with the folks who love the Theatre. Old friends schmooze and as the courtyard fills with the sold out crowd for Yasmina Reza’s ART, it is, indeed, a perfect day.

The Play, however, is the thing and Reza’s way with words, translated from the French by Christopher Hampton, roll off the actors’ tongues trippingly and truly. For me it’s a virtual feast of ideas and ethics and words and the collaboration of some very talented people. Director David Lee brings his sit com takes, pauses and timing to what could be just a lot of words. The scene is set in three beautiful contemporary Parisian apartments. Serge’s digs (haughty Michael O’Keefe) are the fanciest, of course, because he’s the wealthiest of the three old friends. He’s just acquired a new work of art and is madly in love with it. The argument of the play becomes the well constructed vocal objection to this piece of shit… or is it? by Marc, the deep seeded cynic of the three, the excellent Bradley Whitford. Perhaps in an effort to protect his wealthy pal, he loudly protests the two hundred thousand Euros that Serge has shelled out for an essentially ‘white’ abstract painting.

Enter the hapless Yvan, (pronounced Eye-vn, though I have heard it pronounced Eee-van in other productions) an appropriately quirky Roger Bart. The self involved and over the top neurotic stops the show with a three page monologue that rattles through his issues at machine gun pace and leaves no doubt who is the most emotionally conflicted of the three.

The beauty of Reza’s writing, to me, is the fluency and craft of each character’s self revelation expanded by interaction with the others. Marc is agitated and abrasive. Serge is smug and self congratulatory. Poor Yvan is conflicted and bounces like a rubber ball between the other two as the issue of the painting becomes more heated. Their interaction reminded me of The Three Stooge’s: Larry, Moe and Curly and David’s Steinberg’s wonderful riff on how in any given situation there is always someone in charge (Moe), someone who wants to be Moe (Larry) and how someone else just wants to not be Curly (Curly). The power shifts from Serge to Marc with Yvan at last evolving, more or less, into his own as the plot resolves itself. Reza won the Tony for this show in 1998, deservedly. The characters may be over the top, but the interaction is triumphant and in this production, it’s a complete collaboration between the playwright, the cast and the director, supplemented by rich technical support.

Tom Buderwitz’s massive set reminded me of the current Tacita Dean exhibit at the Tate Modern. A huge monolith center stage sets the background for all three apartments that are accented by the artwork selected by the characters, reflecting each one’s tastes. “Motel Art” graces Yvan’s humble home while a modern landscape, reminiscent of Yoko Ono’s large window photographs, is center stage for Marc. The abstract Artrios comes and goes at Serge’s. Jared A. Sayeg’s lighting is dramatic and appropriate.

As The Playhouse regains its sea legs and launches into new waters, I’d hope that the seating situation in the house would be on the list for reconstruction. My seat was threadbare and uncomfortable. There was a hole in the floor big enough for a cat to leap through ready to swallow dropped keys or small children. Sight lines are terrible and the closeness of the rows to one another makes getting to know the other folks crab walking to their seats a bit more intimate than might be desired.

The play, however, is the thing. And, ART deserves repeat patronage and many sold out performances.