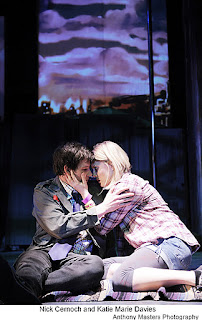 That the current Inside the Ford projects take chances and LA County makes the space available to companies like Furious is commendable. The space itself has gone through many metamorphoses over the years as the Pilgrimage became the John Anson Ford. The Company Theatre produced a unique version of their James Joyce Memorial Liquid Theatre there in the early seventies to huge audiences upstairs … Outside at the Pilgrimage. Prolific playwright Robert Patrick (Kennedy’s Children) held theatre workshops in what was then a simple open space downstairs. Later, Steven Kent’s ProVisional Theatre, split off from The Company, performed political theatre with the story of Xa reminding audiences of the horrors of war.

The space was called the “Taper, too,” for a while, with small creative productions sponsored by the Mark Taper Forum. It’s been a space for experiments. And, yes, experimental theatre is sorely needed to keep the art form vital and fresh.

If nothing else, Furious Theatre Company is taking chances. This lurid tale of teenager Josh Jaxson (Nick Cernoch), spray paint huffer/graphic artist/burgeoning super hero is a stretch. Like a 21st Century graphic novel, Pelfrey’s script flings the audience left and right with unprovoked violent attacks, super hero interventions, parallel universes and some wild video projections reflecting, as a friend pointed out, the heavy influence of television on the youth of today.

The triumverate of erstwhile Super Heros:

These three hapless heroes, modern day everymen: just pretty much normal guys, are thrust by individual heroic efforts into the spotlight, lionized, vilified and eventually driven to a bad end are based on playwright Matt Pelfrey’s examination of Richard Jewell, the Atlanta security guard who may have saved lives at the 1996 Atlanta Olympics.

Enjoyment of and relating to this play will turn on the generation with whom you survive. Twentieth century aficionados who remember early comic books with super heroes like Superman and Batman will find themselves struggling for a point of reference. Evidently, the Graphic Novel has supplanted the comic book in the geek spotlight. There’s a bad moon rising.

In the cast we find a mixed bag of mumblers, screamers, good guys, bad guys, archetypes, stereotypes and bad impersonators. The task is for the audience to figure out which is which, who is who and whether or not to care. With all the doubling going on, program references are a must. Director Damaso Rodriguez has his hands full. Skill levels are uneven and dialogue like “It’s cool, man. Seriously, I’m good.” speaks for itself.

Video projections by Jason H. Thompson are terrific using moving scrims for projections to set the scene on the grungy multipurpose set. Actors duplicate themselves now and then via video. That part works, too. It may be the acoustics in this small space, but much of the dialogue, to me, was garbled, though the action pretty much made up for the loss of any words. Thank goodness the action was graphic. The staged fight scenes need work.

Furious has spent a lot of time, money and energy on this project. I learned that there are five hundred cues: lights, sound and video, making the real super heroes of the evening the Furious technical crew.

No Good Deed by Matt Pelfrey

Email ThisBlogThis!Share to TwitterShare to FacebookShare to Pinterest
Labels: furious theatre, graphic novel, INSIDE THE FORD, no good deed