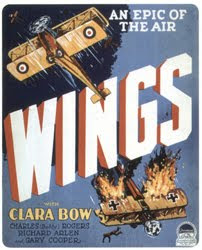 I don't usually review films, but I was invited to Paramount Studios tonight to see Paramount's restored version of WINGS. The effect that I'm sure it will have on audiences makes it important to share.

Though it is unlikely that the restored version of the first Academy Award Winning Picture, WINGS, with Buddy Rogers, Clara Bow, Richard Arlen and a very young Gary Cooper will show up in your local movie palace, it needs commenting on. It’s been over 85 years since William A. Wellman directed this epic of the air. Most of us have seen clips from the film, perhaps in a Chuck Workman montage with Richard Arlen grimacing directly to camera as he bears down on the Heinies. This is to report that this silent film, though over two and a half hours long, with an intermission… takes us back to what a movie is supposed to do. It involves us emotionally, mentally and physically. The declamatory style of acting is what actors practiced in 1925. It’s broad, over the top and totally appropriate.

Clara Bow and Buddy Rogers were at the top of their game in silent films and hundreds of thousands of fans filled the movie houses to thrill to the story. Budgeted at two million dollars, it brought in over four million, a tidy sum in 1927. The story holds up beautifully. The enhanced sound effects, especially the dogfight sequences and battle scenes on the ground are truly amazing. In a day with no green screen nor rear screen projection, Wellman mounted cameras on the bi-planes that the actors themselves literally flew. Bombing sequences were done in real time with real bombs. Thousands of U.S. troops were recruited to re-enact battle scenes which took Wellman and his crew to Texas to accommodate the use of battle gear and soldiers stationed at Camp Stanley in near by San Antonio.

John Stepan Zamecnik’s magnificent score was literally collected, researched, reassembled and restored by Paramount musicologist, Jeannie Gayle Pool. Contrary to information on the Internet, the collection of the original paper music restoration for WINGS was all due to the expert work of Pool. In their introduction to the film, Paramount officials acknowledged the music, having Zamecnik’s family rise for acknowledgement.However, they opted to not mention Dr. Pool nor acknowledge the many members of the orchestra in attendance who recorded the score.

To see the film projected, fully restored, featuring a full orchestra was a unique moment in cinema. As the credits rolled, I searched for Dr. Pool’s name along with the credits for every musician in the orchestra and was disappointed that she was not credited there.

WINGS will be released on Blu-Ray. However, any opportunity to see the it in a real theater with a great sound system will deliver the goods and then some. The Academy’s first Best Picture holds up in every way. Applause to Paramount for dedicating itself to the preservation of this beautiful film.