NOISES OFF! PARTY ON!! 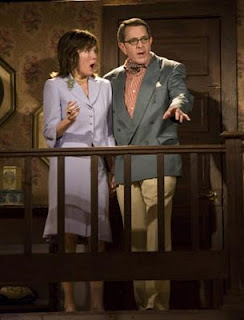 The new space that is almost paid for created by A Noise Within Theatre Company was shaking with laughter, literally, this weekend. A love letter review will follow with kudos to ANW for transplanting the rickety set and the rollicking performances from the old Glendale space to the new theater. A pitch was made for donors who may have the desire to fund a seat for a donation of $2,500 to pay down the remaining half million that the Company hopes to eliminate in the next three years.

Noises Off! Party On!!

The beauty of writing what I want to write is that when a show as entertaining and professionally presented as is Noises Off (through January 15th at A Noise Within in Pasadena) in this brief reincarnation, I can rave about the acting, the writing, the production values, the costumes, (not to mention the lovely set pieces donated to ANW by a friend) and the way a matinee audience explodes with appreciation as this charming cast of players: Shaun Anthony, Apollo Dukakis, Geoff Elliott, Jill Hill, Mikael Salazar, Lenne Klingaman, Emily Kosloski, Stephen Rockwell, and Deborah Strang, cavorts for three amazing acts that rival anything you’ll see at the big houses in town or in New York or London, though I’ve never actually seen the show done anywhere else, so I’m spoiled with the way that Julia Rodriguez-Elliott and co-director Geoff Elliott guide their ship away from rocks, reefs and rough seas, sailing in smoother waters, this errant “British company” of players who, after a tense final rehearsal, which may be a tech or a dress or just a panic before opening night, launch into a voyage filled with sardines, grimaces and doors, doors, doors opening and closing with imprecise precision, locked and blocked and otherwise the fodder of what Moliere would agree most certainly is the heart of farce: as Lloyd Dallas, director of Nothing On, the play within Noises Off, well ranted by Geoff Elliott, announces in the depth of his frustration that this play, funded by-the-by by Dotty Otley (again, triumphant Deborah Strang) is simply put, just about doors and sardines, of which Dotty has an intimate knowledge and that “Looks and gestures is what acting is all about!” encouraging his cast to get on with it while one or another of them asks questions about motivation that anyone who has ever been in a play has asked and probably been answered that maybe just pretending and getting the job done is our objective now and that question should have been asked in the first rehearsal, not the night… well, the morning, now, before the show must go on because that’s what show folk do, they make the show go on and with the carryings on of the assistant stage manager, Poppy Norton-Taylor limned to a fine finish by Lenne Klingaman with whom Dallas may have had an intimate interlude as well as with the blonde bombshell, Vicki, played by Brooke Ashton, brilliantly bouncing down the stairs in her garters or suspenders or whatever you call that sexy thing that holds ones stockings up, Emily Kosloski (which for the gentlemen in our audience, makes the whole three acts certainly exciting and worth the price of admission alone); Act II back stage presents mayhem with jealous abandon, missed understandings and missing actors, which in Act III, as the show playing on the road winds up in the British hinterlands, brings us not one, not two but three burglars crashing through the window, nose bleeds, and of course, several courses of, dare I say… yes, my mountain flower… yes… sardines.

Noises Off by Michael Frayn